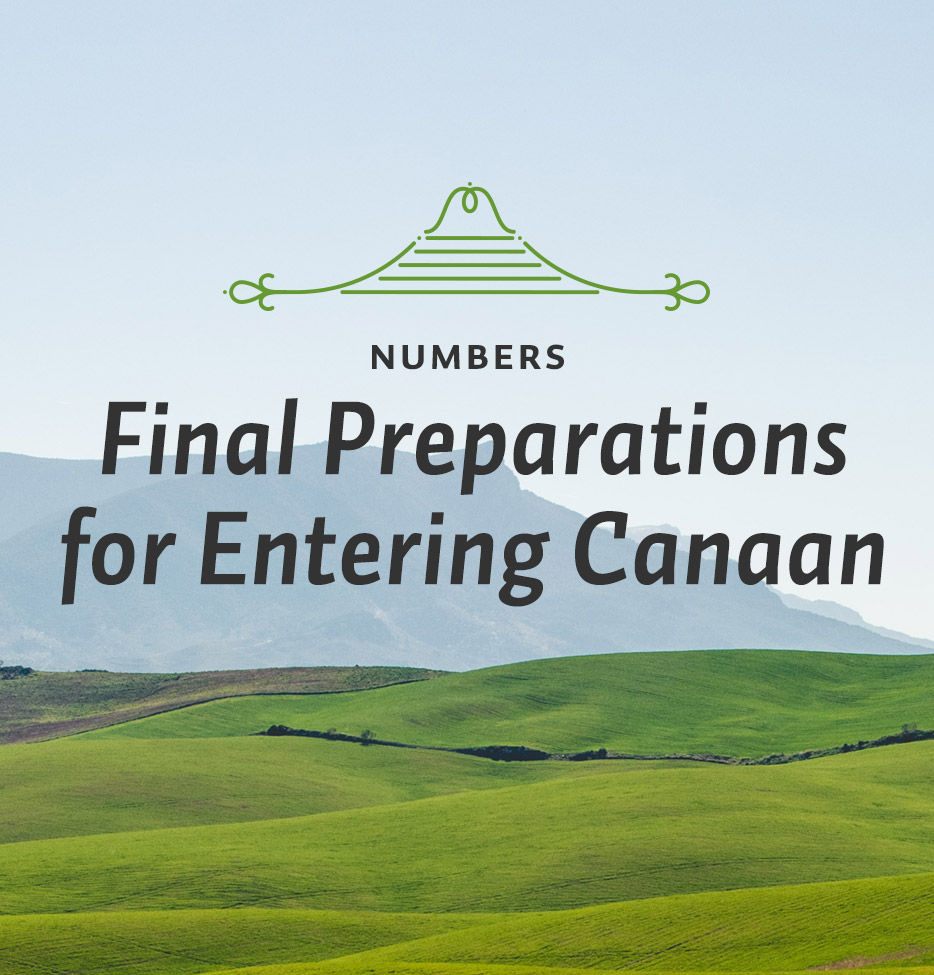 Numbers 26:1-36:13 In this week’s lessons, we look at some necessary final matters before the Israelites crossed the Jordan and went into the promised land.
Theme
Another Census

The story of Balaam is the last significant narrative in the book of Numbers. What we have from this point on is the preparation of the people for their eventual entrance into Canaan and the conquering of the land. The geography is important, which we see from Numbers 26:3. All of this happened on the plains of Moab, by the Jordan River, across from Jericho. But before they crossed the Jordan and attacked Jericho, the Israelites needed to take care of some smaller matters.

Yet, these smaller matters are important, too. They obviously are important to Moses, who wrote the book of Numbers, because they fill eleven of the thirty-six chapters. If nothing else, they give us a picture of Moses, this great leader of the people. He’s 120 years old now, but even though God has told him that he is going to die, he doesn’t wash his hands of the whole business and tell someone else to carry on in his place. As long as God leads him, he takes responsibility and pursues it to the end.

This last portion accounts for almost the last third of Numbers. We have studied some of these matters earlier, so we will not need to go over them again. Instead, I will give an overview and then point out the lessons for us to apply.

Numbers 26 gives us another census of the people; the first census took place at the very beginning of the book. The purpose of both was to determine the number of men who were fit for war so they could organize for battle. But after the first census, there has been a hiatus of thirty-eight years. Another generation is ready to go into the land, and they need to take a census again.

There is a different emphasis here in this second census. The people were being numbered not only for the sake of the conquest, but also for the apportionment of the land. In the first census we are told, “All the Israelites twenty years old or more who were able to serve in Israel’s army were counted according to their families” (Num. 1:45). Similar wording is used for the second census at the beginning of chapter 26. The list of those eligible to serve as soldiers is given, but we also see the additional element of introducing the clans as well as the tribes, because the apportionment of the land would really be by these various tribal groupings.

When you add up the numbers of the second census, we find that they are almost the same as the first census. Most of the tribes had increased a little bit in size, although four of them had declined. When you look at the totals, the first census was 603,550, and the sum for the second was 601,750, a difference of less than two thousand. In spite of the wanderings of the people, their sin, and God’s judgments that had come upon them, after these thirty-eight years the numbers are roughly what they were at the beginning. Now, sin does have consequences, but God’s purpose wasn’t frustrated even by their sin. God is not frustrated by our shortcomings, either. His plans are set in history and done perfectly.

One striking thing about the second census is that all of the names are different, with the exception of Caleb and Joshua. God had said to that first generation that because they refused to have faith to go into the land, they would die in the desert. And so they did. Now, in the second census, we find that, with the exception of Caleb and Joshua, these are entirely different people. Are we believing or are we unbelieving? Are we standing with men like Caleb and Joshua, saying that the Lord can accomplish His plans? Or do we disbelieve and doubt His ability?

Numbers 27 is important because it has to do with the appointment of Joshua to succeed Moses. Aaron and Miriam had died, and God told Moses that he would be able to go up the mountain and see the land, and then he is going to be gathered to his fathers, just as his brother Aaron was. We know that he was terribly disappointed that he wasn’t able to go into the promised land. He has been in the desert for eighty of his 120 years, and he had been on the border of the land thirty-eight years before. He was ready to go in and do it, but they lost their opportunity. You can understand why he wanted to put his foot over the river so that he could at least stand in the promised land, even if he died immediately after that. He pleaded with the Lord to be able to go, but the Lord had said no (see Deut. 3:23-26).

Reflection: Do you need to have greater trust in the Lord to accomplish His plan in your life?