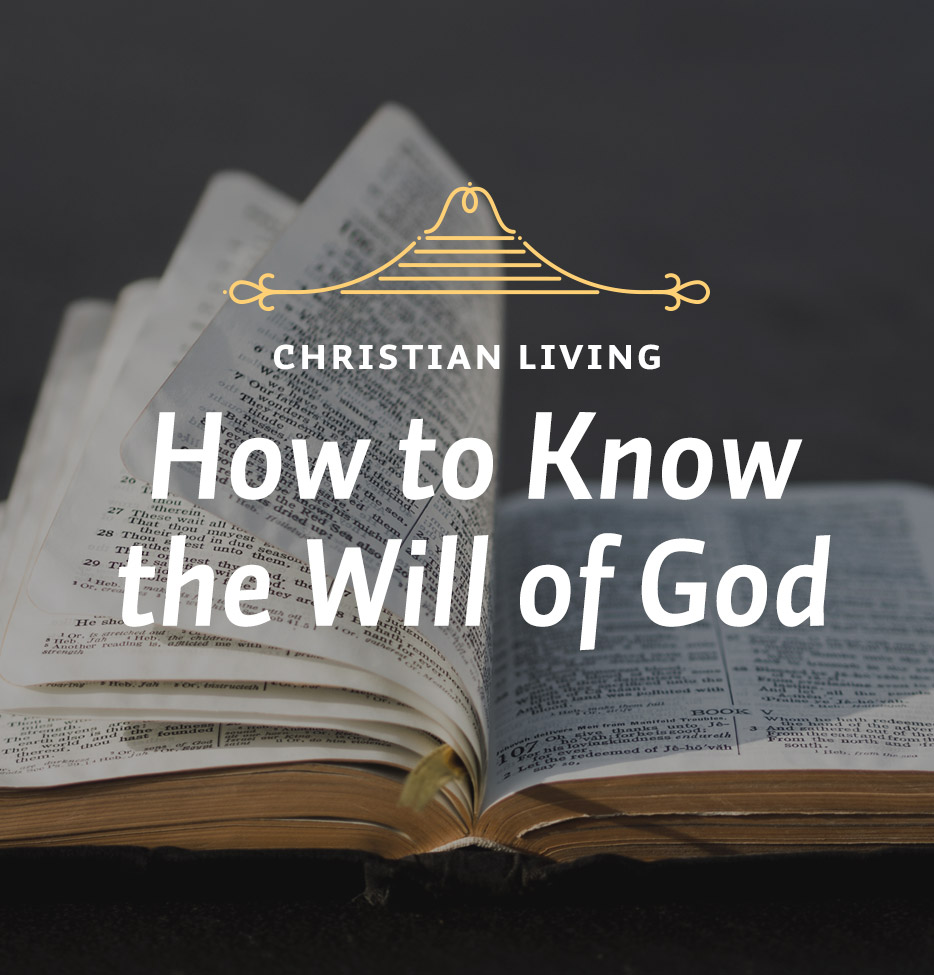 Wednesday: Led by the Lord’s Eye

In this week’s lessons, we look at this important matter of how the Christian can know the will of God and live in a way that is pleasing to Him.
Theme
Led by the Lord’s Eye

Now there’s one more principle, a third principle, and it’s also important. It is the principle of daily and even hourly fellowship with the Lord. Psalm 32:8 states it like this: “I will instruct thee and teach thee in the way which thou shalt go; I will guide thee with mine eye.” Clearly, if God is to guide us with His eye, He must first catch our eye. And this means that we must look to Him regularly throughout the day.

Let me illustrate this by a story. I have a good friend who is a gospel singer and who, for many years, was a bachelor. He eventually found the right girl and married her. She was perfect—perfect, that is, in every way but one. At times she talked with a very shrill voice, and especially in the presence of company. And because he is a baritone, her voice often grated on his ears. It might not have been a problem to anyone else, but this was the making of a serious problem in their marriage.

Now the Lord had given this man a great deal of tact, and also his wife a great deal of patience, I’m sure. But my friend went about solving the problem in this way. One day he came to his wife and said to her, “Dear, do you know the first thing that a drama coach teaches an actress when she begins training?” His wife said, “No.” “He teaches her to lower her voice. By nature a woman’s voice is a bit high for public speaking, but it becomes warm and pleasing when it is lowered about an octave. A drama coach will teach an actress to say a phrase, count down seven notes, repeat it again, and then practice that repeatedly. I think your voice would be improved if you would do that.”

When my friend’s wife agreed, they arranged a signal by which she would be reminded to lower her voice in the presence of company. The signal was for him to tuck in his chin. He told me that there were times when this produced the funniest effect you could imagine. There they’d be, sitting around the dining room table talking, and his wife’s voice would be riding higher and higher. He would tuck in his chin and look at her. Then, often right in the middle of one of her sentences, she would catch his eye. She would notice his chin, and her voice would drop like a lead marshmallow, and go on at a pitch one octave lower. She saw the sign when she looked at her husband.

Now it must be the same in our daily walk with the Lord. The Lord knows that we will go astray. It is our nature to go astray. Our speech or conduct will become displeasing. We will always do things that displease Him unless we get into the habit of looking to Him often—in church, during our quiet time, at various periods in our day—to catch His eye. Then, if we catch His eye, we will find Him watching. He will direct us, and He will, as the Scriptures say, guide us with His eye.

Now there’s only one more point on this that I need to make, and it is not difficult at all. If you are serious about knowing the Lord’s will, and honestly seek it, then you must be prepared for the Lord to guide you into new ways. If there’s one thing that I have most learned about the Lord’s guidance, it is that He does not often lead us in old ways. God is creative. He is infinite. So naturally, He is infinite in His plans for His children. David Wilkerson, who’s been greatly blessed in a unique ministry to teenagers in New York City, told in the opening chapter of his book, The Cross and the Switchblade, how he was led into new paths in his ministry.

He had been a Pentecostal preacher in central Pennsylvania. By his personal standards he was doing quite well. The church had grown. There were several new buildings. Yet he was discontented. One day he decided to spend the late evening hours, when he had been used to watching television, praying. He sold the television set after much hesitation, and began to spend time with the Lord. He did this for some time. Eventually, out of these times he was led to begin his work helping young people in Manhattan who were caught up in drug addiction and delinquency. God’s will for David Wilkerson led a country preacher into the heart and the heartbreak of the city.

It will also be true for you. If you seek God’s will, determining to do it even before you know what it is, if you look to Him while responding to His voice in the Bible, then God will reveal His way and direct you in ever widening and ever more interesting paths. He will be close to you, and He will lead you in the way that you should go.

How do we apply these principles in areas on which Christians differ? Should you as a Christian drink alcohol or not? Will it be harmful to your testimony if you play cards? Can you work for a company that manufactures war materials? To what extent can a believer adopt the standards of his time and society?

Questions such as these are asked by Christians at many different points in their lives; and they are important, for they concern the problems of regulating conduct in areas of life where the Bible is not entirely explicit. And the question is, how do you deal with them?

Now you need to recognize first that, although many of the things that trouble Christians are silly and do not deserve much attention, not all of them are. Consequently you must not make the mistake of avoiding all serious thought about them. For instance, in this country there are often many “don’ts” in Christian circles that I’m convinced have in themselves little or nothing to do with Christianity. “Should I go to the movies?” is one of them. “Should I wear makeup?” is another. In some circles these behavioral patterns are almost a badge of a person’s commitment to Jesus Christ. And yet, in England, among believers who are entirely conservative and firmly committed to the Lord, these things mean nothing at all. Instead, they believe the touchstone of real commitment lies in observing Sunday as a day of rest, free from normal activities. In Switzerland women are noted for their piety if they wear long hair; if it is short, in line with modern fashions, many will think them to be backsliding in their Christianity.

Reflection: In what areas do you have a tendency to stray from the Lord? What steps will you take to minimize those temptations? Ask the Lord to give you a heart that is growing in spiritual sensitivity.