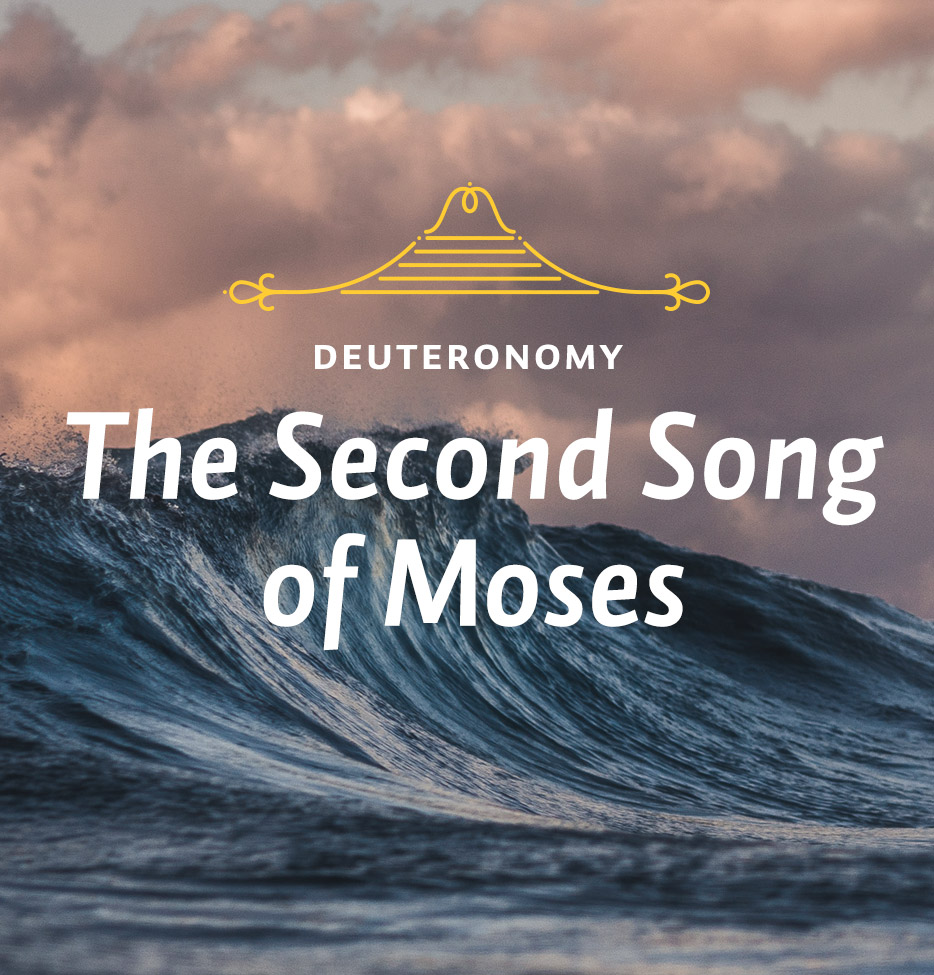 Deuteronomy 31:30-32:47 In this week’s lessons, we look at Moses’ final instructions, including his song of warning to the people if they fail to keep the Lord’s commands.
Theme
The Importance of the Written Word

Joshua must have been very worried as he stood on the brink of the conquest. The people are ready to fight, but what would happen when they got into the land and came up against these fortified cities? He needed God to tell him to be strong and courageous. Joshua was not to be afraid because God was going to be with him and give him the victory.

Even the apostle Paul must have been afraid on some occasions, because he told the Ephesians, “Pray also for me, that whenever I open my mouth, words may be given me so I that will fearlessly make known the mystery of the gospel, for which I am an ambassador in chains. Pray that I may declare it fearlessly, as I should” (Eph. 6:19-20). Paul dealt with the temptation to be fearful. This is a lesson for us. Those words have to be spoken to us as well.

We are fighting spiritual battles and we are doing it in a hostile environment. There are citadels of unbelief to be overcome. We need courage to do it, and we get that courage from reading the Bible, from praying, and from being encouraged by one another. We need to encourage one another. Moses is encouraging Joshua, God is encouraging Joshua, Joshua is encouraging the people, and the people are encouraging Joshua. Sometimes, life is relatively easy, but then difficulties come into our lives. We need Christian friends to say to us, “Come on, don’t be afraid now. God will be with you and He will bless you.” That’s a great ministry for any Christian to have. Ask the Lord whom you can encourage to press on.

The third theme that we find in Deuteronomy 31 is the importance of the written revelation of God. Many times in this chapter Moses is said or implied to have written these things down (see vv. 9, 19, 22, 24). We know that Moses authored the first five books of the Bible because when other biblical writers—especially New Testament writers—quote from them, they refer to them as being books of Moses. Yet up to this point, except for one or two rare instances, Moses has not been declared to be the writer. Of course, it is natural not to mention this since he is the one who’s writing. But now, as he’s coming near the end of his life, he says here several times that he is the one who wrote them down. He is a prophet of God and he writes these things down by inspiration of God.

Another part of this emphasis on the written revelation of God is seen when the priest is charged to preserve the law and read it in its entirety to the people at least once every seven years at the Feast of Tabernacles. There were three feasts in the course of the year where all able-bodied men and their families were to go up to Jerusalem. The Feast of Tabernacles was a high feast, and more sacrifices were performed at this feast than on any other occasion. The reading of the law would be like a renewal of the covenant. It is emphasized that the children have to hear it. If it is read every seven years, then every child of Israel at least once in his childhood, some of them twice in their childhood, would experience and participate in this very impressive ceremony (see vv. 9-13).

There is a third thing that shows the importance of the written law. Moses says that they are to preserve it by laying it up in the tabernacle beside the ark of the covenant in the Most Holy Place. The ark of the covenant contained the stone tables of the law—the Ten Commandments, the very heart of the law. But Moses told the people to take the law that he had written down during the years of wandering in the wilderness, and to lay it up beside the ark as a testimony to them that they had been given this law and had promised to obey it. It was also a testimony to them of God’s requirements. If there were ever a question about what should be done or how they should live, the law was there. All they had to do was consult it. This shows the very special relationship that the people were to have to this written law of God (see vv. 24-26).

But I don’t want you to miss the fact that even at this early stage in Israel’s history, there was a written revelation. At the time, their canon only consisted of the first five books of the Bible. But what they had as their code was in writing, it came from God, and it was binding upon the people. Liberal theologians don’t like this or believe it. They say there was not even a written law at this time. Yet the books themselves tell us that not only did the people have this written revelation from God, but they recognized it as a written revelation from God. Joshua, in particular, received God’s Word and was told by God to meditate on it day and night and not turn from it to the right or to the left. Francis Schaeffer wrote,

Joshua knew Moses, the writer of the Pentateuch, personally. Joshua knew his strengths and weaknesses as a man; he knew that Moses was a sinner, that Moses made mistakes, that Moses was just a man. Nonetheless, immediately after Moses’ death Joshua accepted the Pentateuch as more than the writing of Moses. He accepted it as the writing of God. Two or three hundred years were not required for the book to become sacred. As far as Joshua was concerned, the Pentateuch was the canon, and the canon was the Word of God. The biblical view of the growth and acceptance of the canon is as simple as this: When it was given, God’s people understood that it was his Word. Right away it had authority.1

Now it is that same conviction as to what we have in the Bible that links us to Joshua and Deuteronomy. We need to respond to the Bible in the same way the Israelites did, saying “God has given us the Word. We receive it and believe it.” This is what links us not only to Joshua and Moses, but also to God. The way we know God is through His written revelation and what He has spoken. That is the great truth on which Deuteronomy 31 ends.

Application: How will you encourage someone who is struggling?