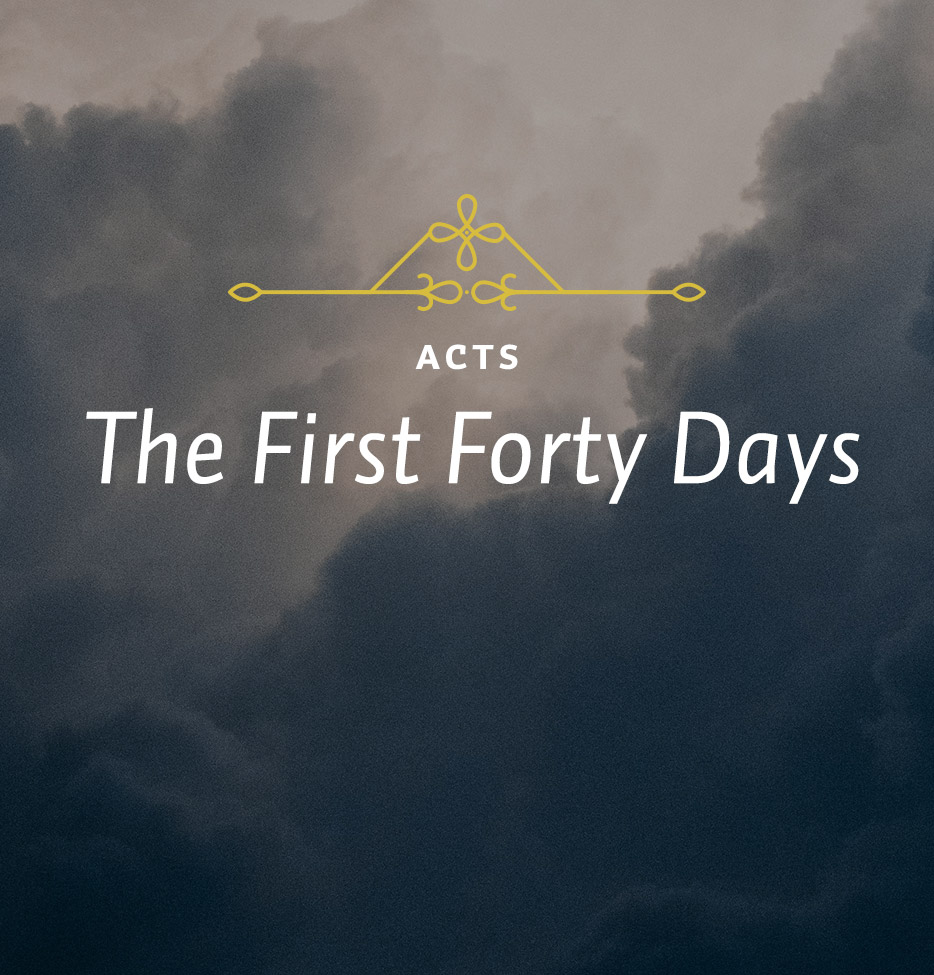 Acts 1:1-11 In this week’s study we see that Jesus and His resurrection are rooted in history, and that we are to tell others of the Good News concerning the salvation of sinners.
Theme
Historical Facts

We begin with Acts 1:1-11, verses that deal with the forty days between the resurrection of Jesus Christ and His ascension. These were important days, and Luke emphasizes important things as he reviews them. First, there is an emphasis upon the historical basis of Christianity. Luke tells Theophilus, to whom he is writing, that he is a historian and that he is going to continue the history that he began in his Gospel. In that earlier book he said that he had investigated the details of the life of Jesus Christ quite carefully and had written them down only after this investigation. Luke wants to continue that procedure in this volume. The things he wrote concern “all that Jesus began to do and to teach until the day he was taken up to heaven” (Acts 1:1). These things obviously are going to continue in the church by the power of the Holy Spirit.

“Acts” is a short name for “The Acts of the Apostles.” But people who reflect on the appropriateness of this title suggest that it is not really the best way to refer to Luke’s book. Acts might more properly be called “The Acts of Jesus Christ,” or, to be even more accurate, “The Acts of the Holy Spirit in the Church of Jesus Christ through God’s People.” The great English rector John R. W. Stott suggests, “The Continuing Words and Deeds of Jesus by His Spirit through His Apostles.”1

Christianity is a historical religion. It is a religion based not primarily on an idea or philosophy, which, if it were, could exist with or without the one who introduced it. Most of the religions of the world can exist apart from their founder. You do not have to have a historical Buddha to have Buddhism. All you have to have are Buddhist teachings. So also with many other religions. This is not the case with Christianity. If you take away the history—if you reduce it, as some have tried to do, to a religion of mere ethics or ideas—Christianity evaporates. This is because Christianity is linked indissolubly with the life and accomplishments of Christianity’s founder.

Jesus taught about God. But He did not merely teach. He showed what God was like. Then, in order to achieve our salvation, He died for us, taking our place to bear the wrath of God. Without that historical basis Christianity would dissolve. Without it Christianity would pass, as many other religions have passed, into the trash bin of history.

But it is not only that Christianity is a historical religion. It is also important to see that it is based on proven fact. There is much skepticism about this in our day. Whenever you talk of “facts,” or worse yet, “proven facts,” people grow skeptical because they question whether in the ultimate sense anything can ever be proven or be certain. We can understand and sympathize with that because we are all fallible human beings, and we perceive things fallibly. We distort what we receive.

This is pointed out in science where, in certain kinds of experiments, the very presence of the observer changes what happens. In such situations scientists rightly point out that there is a barrier of observation beyond which we cannot seem to go. There are situations in which we can never really know what is going on because the very fact that we are trying to know what is going on changes what is happening.

That is true in science, but Christianity is different. When Luke writes of Jesus’ resurrection, he says that Jesus “showed himself to these men and gave many convincing proofs that he was alive” (Acts 1:3). That is a very important sentence, for it indicates that Jesus did not merely give his disciples certain ideas that they were then to carry forward into the world. He appeared to them as one who had risen from the dead. They knew He had died. Some of them had stood at the cross. They had heard the blow of the hammers. They had seen the nails driven and then later, when the soldiers came, saw the spear thrust into Christ’s side. They knew Jesus had died. In fact, so convinced were they of His death that they soon began to scatter and go home, because… well, although it was nice to have known Him, He was dead now. And to give one’s life to the mere memory of a dead Christ would be foolishness.

But then Jesus rose and began appearing to them. His appearances were sufficient to draw them together again. They would never have come together for a philosophy or mythology. They came together because the Christ they had known and loved was alive. He had conquered death.

Reflection: Have you encountered people who think of Christianity as a religion of ethics? How should you address this?

For Further Study: Download for free and listen to Donald Barnhouse’s message, “The Building of an Apostle.” (Discount will be applied at checkout.)