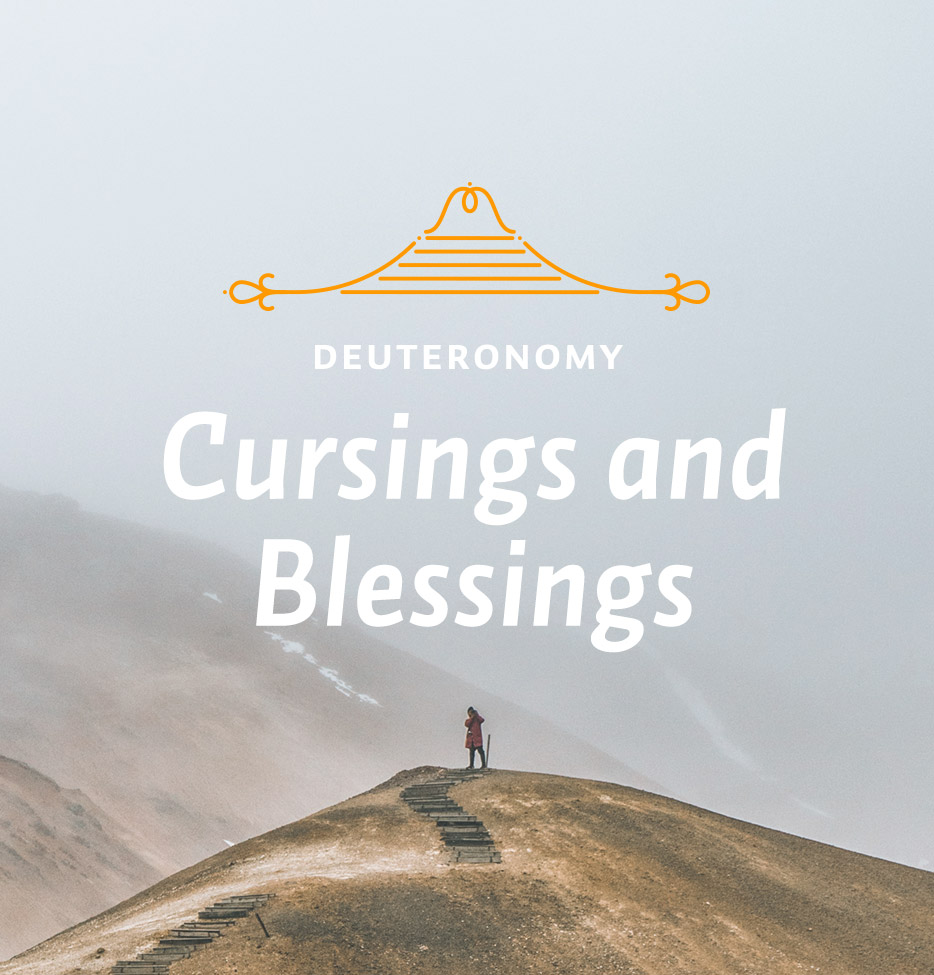 Thursday: Entering into the Covenant: Deuteronomy 27:1-30:20

Deuteronomy 27:1-30:20 In this week’s lessons, Moses continues to urge the people to obey the Lord and seek the way of life and blessing, rather than to forsake the Lord and follow the path of cursing and death.
Theme
Entering into the Covenant

Moses already went over the people’s history before. Why is he saying it again? Moses explains that even though he said it before, the people didn’t really see it. It didn’t get through to them. The people were blind to the implications of the work of God. We need spiritual sight, too, and such spiritual healing only comes to us from God.

And then he describes this entering into the covenant in verses 9-21. His point here is that God’s covenant is not something to be entered into lightly, nor something that’s only for the moment. The people were not to think, “I will be safe, even though I persist in going my own way” (v. 19). That line of thinking is disastrous. Moreover, the people have to understand that when they enter into the covenant they are not only entering into it for themselves, but for their children as well. The covenant would be binding not only for their present generation but for generations to come.

Beginning with verses 22-29, he warns of specific disasters to come, looking beyond the siege to the exile. Enemies will encircle their cities and wall them up; they will breach the people’s defenses and will carry them away into exile, leaving the land desolate. They will destroy all their houses and all the olive groves. The vines are going to be uprooted and destroyed, and all the city walls are going to be cast down. Strangers will come into the land and ask themselves, “What in the world did these people do that caused their God to destroy their land like this?” Moses then gives the answer:

It is because this people abandoned the covenant of the LORD, the God of their fathers, the covenant he made with them when he brought them out of Egypt. They went off and worshiped other gods and bowed down to them, gods they did not know, gods he had not given them. Therefore the LORD’s anger burned against this land, so that he brought on it all the curses written in this book. In furious anger and in great wrath the LORD uprooted them from their land and thrust them into another land, as it is now. (Deut. 29:25-28)

This is exactly what happened. The people receive their first warnings here, but they will go their own way. They will follow the gods of the land, worshiping them at the high places of Canaan. God will send His prophets and warn the people again and again. The people will come back to the Lord in repentance for brief periods of time, but then fell into apostasy once more. Finally, everything that was spoken of here by Moses came true. The northern kingdom would be overthrown in 721 BC, and then nearly one hundred fifty years later, in 586 BC, the same thing happened to Judah and Jerusalem in the south.

There is an interesting verse at the end of Deuteronomy 29, and it has assumed unusual importance in people’s thinking: “The secret things belong to the LORD our God, but the things revealed belong to us and to our children forever, that we may follow all the words of this law” (v. 29). What that verse means in the context is that the people were not told what was going to happen, whether it was going to be blessings or curses. From their perspective it was contingent on what they did. God Himself knew, but He is not revealing this to them. It was just important that they obey.

Prayer: Ask the Lord for greater spiritual insight in order to know Him better and to more faithfully do His will.

For Further Study: Download for free and listen to James Boice’s message, “The Curse of God.” (Discount will be applied at checkout.)